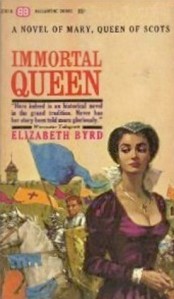 Immortal Queen, by Elizabeth Byrd. New York: Ballantine Books, 1956
I bought this book at a used book sale in 1975. I have read it at least several hundred times. Along with Gone With the Wind and Katherine, it is easily one of my favorite books. It sweeps you into its drama with the very first sentence. It is all Mary, all the time. Written totally from Mary’s point of view, we always know what she is thinking, feeling, doing. Unlike Jean Plaidy’s Mary – Royal Road to Fotheringhay was published the previous year – Elizabeth Byrd presents a Mary Stuart in control of her destiny. She is imperious, intelligent, tenacious and true to her own self to the very end. She is not always the nicest person in the world but she is always a Queen.
From the very beginning, this is the love story of Mary and Bothwell. In the Prologue, she is preparing for her death, and she is thinking of him, dead nine years earlier. As the Prologue turns into Chapter One, she hears thunder and remembers a lion roaring in her childhood and we are taken to St.Germaine-en-Laye, where a twelve-year-old Queen Mary is learning with the Valois children and young lion is chained nearby. Mary is upset about the lion and starts to cry. “I can’t bear it!” she sobbed, hand to her face. (15) She doesn’t know why but later – much later – she realizes that she was seeing into the future.
But at this point in the novel, her whole life is France. Through a series of vignettes, we see Mary rigorously learning Greek with her governess and the Valois royal children; Mary’s friendship with her Maries; Mary’s antagonism with Catherine de Medici; Mary’s affection for her uncle the Cardinal de Lorraine; Mary’s admiration for the king’s mistress, Diane de Poitiers.

By the time she is ready to marry Francis, the Dauphin of France, her personality is well-formed. Intelligent, intuitive, and idealistic, she is ready to take power in her hands but frustrated with having to defer to her uncles and the king. Of course, this is her problem when she gets back to Scotland as well. And things are not going well in Scotland. Her mother, whom she has not seen since she was a child, is the regent in Mary’s absence, and she is fighting a bloody civil war against Mary’s own nobles. Mary’s young husband is sick & near death when she hears of her mother’s death and this is when Bothwell enters Mary’s life. There is an instant sexual attraction between them, more on Mary’s part than Bothwell’s, of which Mary is resentfully aware. But more importantly, they connect as friends. Mary is able to be honest with Bothwell as she is unable to be with anyone else in her life, even her Maries.
The rest of the book goes along the predictable storyline. Francis II dies and Mary returns to Scotland. Unlike other novels, Mary has a distrust of her bastard half-brother James Stewart from the start and doesn’t agonize over the end of their familial relationship. When he is giving her good advice, she is happy to have him in her court and on her council but when he’s being a jerk, she gets rid of him happily.
Mary may not be happy in Scotland but she is totally its Queen. She never stops trying to consolidate her power, even as she tries to be tolerant of the religious differences of her Lords and the people of Edinburgh. She meets with John Knox in an attempt to neutralize his attacks on her. She holds up reasonably well but is no match for his rhetoric. She takes on the Earl of Huntly, the major Catholic Lord in Scotland, and a perceived threat to her own power, and she decimates his base in the North. She executes Chastelard. She hires Rizzio as a musician and he eventually becomes her private secretary. She marries Henry, Lord Darnley after an exhaustive search for a husband. In this novel, she does falls in love with Darnley but Bothwell insists to Mary that she is merely in a “dream of lust”. (226) Of course, Bothwell is right. Once the honeymoon is over – barely before the wedding night – Mary is once again dreaming of Bothwell.
But basically, it’s the love story of Mary and Bothwell. She is always in love with Bothwell. She loves Bothwell even though she knows he’s the worst marriage prospect ever since none of the Lords will ever work with him. Somehow though, she thinks that once they’re married everything will be OK. Of course it goes from bad to worse and the lovers, now married, separate at Carberry Hill, and the last 255 pages of the novel deal with Mary in various prisons, where she manages to smuggle letters to Bothwell in his various prisons. Near the end of the novel, when Mary is imprisoned in Sheffield, she learns that Bothwell has gone mad and has been put in the Danish State Prison at Dragsholm Castle in New Zealand. She flashes back to her childhood at St.Germaine-en-Laye, and sees the chained lion in the garden and wonders if she too, is going mad.
The rest of the novel goes by predictably. Mary grows older and becomes arthritic. She rejoices as her enemies are killed off in Scotland. She accepts her plight as a prisoner; then one day she decides she wants to be free and takes a dangerous chance with a local brewer and a young page, never knowing she is being set up by Elizabeth’s master spy-catcher. To the end, she struggles with the concept of going to her death as a Catholic martyr. Thinking about her coming death, she thinks, “She did not fear the act of dying; she feared the aftermath, the fires of hell.” (593) Continuing her reflection, she imagines that “God might forgive her for her part in Darnley’s murder, for she repented daily, nightly. But he could not forgive her adulterous love for Bothwell or her heretic marriage – because she could not truly repent them.” (593) The novel ends with the words, “En ma fin est ma commencement … In my end is my beginning.” (631)
After the novel end, there is an “Afterward” in which Elizabeth Byrd writes, “That truth is stranger than fiction is again made evident in the life of Mary Stuart.” (632) She writes about some of the incidents in the novel, asserting they were true but also using sources that were somewhat biased and melodramatic in tone. She also believes in the authenticity of the “Casket Letters”, writing, “For four hundred years controversy has raged about these letters. Mary’s defenders claim they were forgeries or that her enemies made interpolations in innocent letters. It is doubtful we shall ever know the truth, for the original letters no longer exist and only copies remain.” (634-35) She then quotes at length from Stefan Zweig, whose “psychological” biography of Mary Stuart was one of the most misogynist versions I had ever had the displeasure to read; Byrd writes that she agrees with Zweig that Mary wrote the Casket Letters “for it was perfectly in her nature to write foolishly and even dangerously. (No one has ever questioned the authenticity of her letter … reviling Elizabeth).” (635) I might point out that those letters are mutually exclusive; and the letter reviling Elizabeth was found in Mary’s possession, not in some other place; but of course, it is also not love letters and sonnets to a swash-buckling lord. Which you need for a novel like this.

When I first bought the book in high school, I simply read it and loved it and didn’t think about it too much. I simply loved Mary and wanted to be like her. A queen, in control of her destiny, even if that destiny didn’t turn out so great. She never stopped trying and that’s what I loved about her. She had great beauty and great style and all her people loved her. She had a great love story that lived on beyond her. That’s what I saw for years and years. Who wouldn’t want to be like that?
Recently, though, I’ve seen other things in this book. Things that get on my nerves. Not really bad, not bad enough to stop me from reading it but I have to mention them. This is supposed to be the great love story of Mary and Bothwell? Well, isn’t Bothwell’s name James Hepburn? Wouldn’t it make sense that Mary would call him James or Jim or Jimmy or even something more private like ma cherie or mon amour or anything like that? Even when she is being beheaded and she is calling out to him, she is calling out to “Bothwell!” (628) (itialics in book). I find that really amazing.
Also, if this is supposed to be such a great love story between the two of them, why does Mary have to stoop to such idiot-ass pranks to get Bothwell to notice her? Like she’s a high school freshman and he’s the big man on campus. She’s the Queen, for heaven’s sake. But she spends almost every waking hour after she gives birth to her son James to getting Bothwell’s attention. It isn’t even a question of seducing him, she’s not even in his sights. She has to make his wife think they’re having an affair, which pisses him off and then he beats her and rapes her. But in true romantic novel fashion, the brutal rape turns to ecstatic love and by the end of the chapter, Mary is in glorious heaven. Bothwell too is in love. Instead of taking Mary, he is taken himself. “I thought only to humble you, and find I have humbled myself.” (359)
Even as a girl, I found this scene problematic. A woman is beaten and raped and she falls in love with the rapist? Really? Even if she was already in love with the rapist, being beaten up and taken like a dog isn’t going to make any woman feel particularly loving. And rapists don’t talk of being “humbled”. They don’t use that kind of language at all. Besides, Bothwell’s subsequent words and actions are anything but “humble”. He tells her, “None will possess you, brain and body, as I do.” (360) Which may sound romantic but are actually about power and control.
Still, this is one of the most satisfying novels about Mary I have ever read and I would recommend it to anyone. It’s an easy read, on the level of Gone with the Wind, and the singular point of view is similar to GWTW as well. It’s all Mary, all the time. While we’re at it, the character of Bothwell, as written in Immortal Queen, has more than a passing resemblance to Rhett Butler. Both are tall, broad, graceful, well-read, independent, cat-nip to women, and are serve as truth-tellers and shit-detectors for either Mary or Scarlett. GTWT was written twenty years earlier than Immortal Queen and the Rhett Butler archetype had been well established by that time.
I could write a lot more about this novel and will probably come back to it some day because there’s so much I like about it but also a lot more to discuss about it.

Elizabeth Woodville and the Cloisters Deck: Popular Portraits of Royalty.

How Not to be a Brazen Strumpet.