I live in an older house, well over one hundred years old.  In fact, nobody has lived in the upper apartment (my apartment) since 1978 & the downstairs has been empty since the previous owner died several years ago; she was over 100 years old, apparently.   Until recently, there had been no improvements to the house since the middle of the last century.  My kitchen & bathroom were completely redone before I moved in but the general feel of this place is early 1900’s, which I love.

But like all old houses, it has a lot of inner problems – electrical, plumbing, etc.  Every Saturday, since I moved in, a plumber has been here switching out all the old lead pipes with beautiful new copper pipes.  This is a huge job.  Of course, that means the water is off most of the day.

I can deal with this but Jack can NOT.  He has a thing for drinking the water from the faucet in the bathtub.  It used to drip nicely but Brett the plumber fixed that.  So Jack comes to me & asks to have the water turned on.

Well, try explaining to a cat that the water’s turned off & I can’t do anything about it. 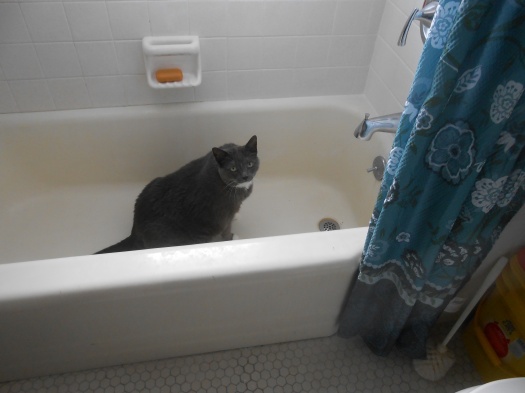 He’s been sitting in there, meowing & complaining for the last hour.

If he’s not in the bathtub complaining, he comes out to the living room where I’m working on a few projects as I watch season 3 of “Medici” on Netflix.   Or he’s sulking. 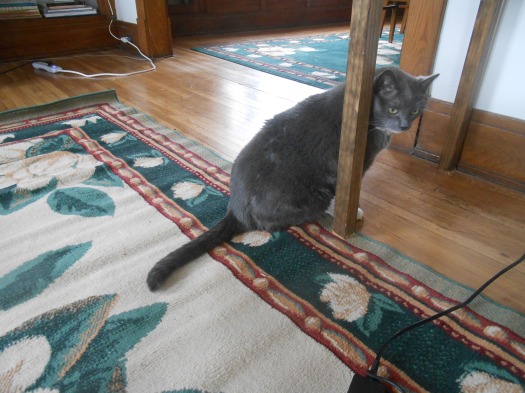 As soon as Brett the Plumber leaves, I’ll be happy to turn the water on for him!  Poor Jack!  Such a hard day for an old kitty! 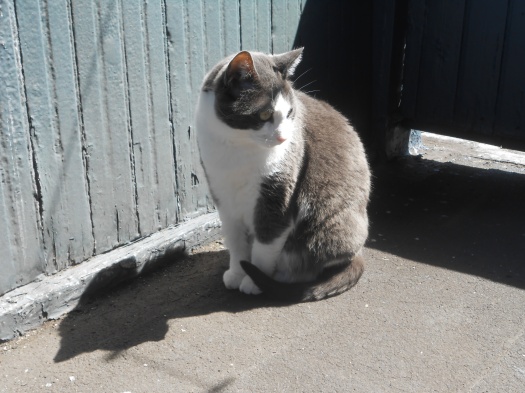 It’s finally a decent day!  Radar & I are sitting on the back porch.  I don’t have any porch furniture yet but that’s not stopping us from enjoying the sunshine.  With the big tree right next to the porch, it’s like having our very own tree fort.

The other cats enjoy the porch but not like Radar.  He’d spend the entire day out here if he could.  Well, maybe in another month when we have a couple of chairs & a little table.  Ok, Radar?   Well – you know what it’s like trying to reason with a cat! 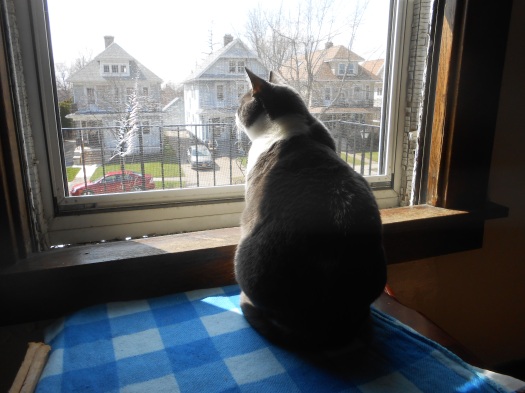 It’s sunny today here in Buffalo but like so many April days, there’s a stiff breeze off of Lake Erie & that breeze is COLD!  But Radar wanted to look out the front window so I opened it for him.   He enjoys an open window much more than a closed one, just like the rest of us.   He likes looking at the people walking by with their dogs … the joggers … the UPS & FedEx delivery … everything.  He’s a Zen cat. 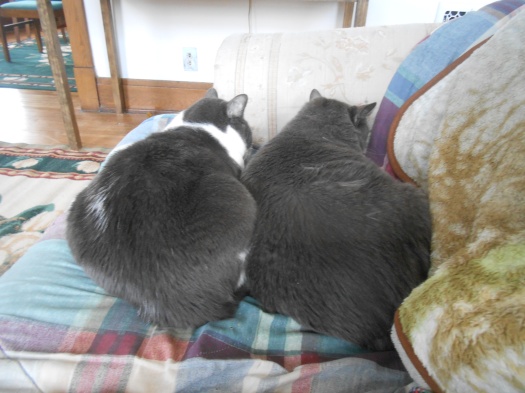 It’s April 11 & although it looks like spring, it feels like winter with a relentless cold wind that hasn’t let up all day!   Bobby is sleeping in front of one of the heating vents but Radar & Jack are cozy together on the couch here with me.  I wish you could hear them snoring!

It’s April 11 & if you look out the window, it certainly looks like spring – blue skies & puffy white clouds & bright sunshine.  There are robins everywhere & flowers blooming & the grass needs to be cut already.  But don’t let that lovely picture fool you!  It’s really cold out there with that cold wind out of the west.  That wind hasn’t let up all day & it’s only supposed to get worse tomorrow & into Monday.

Bobby’s camped out in front of one of the heating vents but Radar & Jack are cuddled up together on the loveseat here next to me as I read this Saturday afternoon.  Radar is a real cuddler & will always opt to sleep next to another warm body.  Jack is a four-legged furnace, so he’s that perfect warm body for Radar.   I wish you could hearing their snoring!

Radar has a cold or maybe he suffers from seasonal allergies like I do.  He’s been sneezing & coughing a lot lately, & his breathing sounds definitely congested.  I’d had to clean out the junk that accumulates in his eyes much more often than usual & I even had to clean out his little pink nose so he could breathe more easily.

Whatever the problem is, he is right on top of me, which is making writing difficult, if not almost impossible. 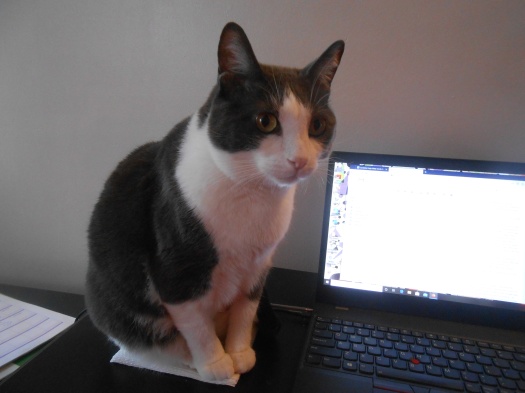 After this picture was taken, he settled down & fell asleep on my left hand. 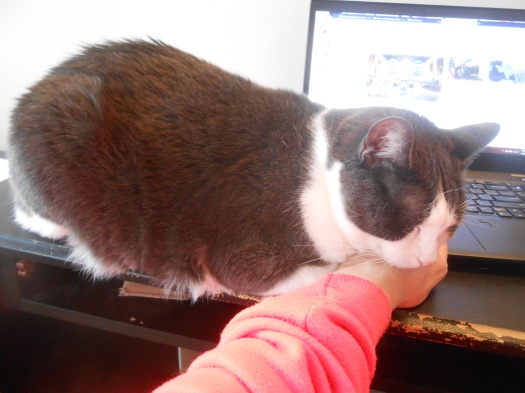 I’ve written this entire blog post with only my right hand & for someone who can actually type — like as fast as I can think — that hasn’t been very easy!

Hopefully, he’ll be feeling better in a few days!  My poor little buddy!

The plumber was here all day yesterday.  The apartment that I’ve moved into has been empty since 1978 so the pipes don’t work as well as they should.  Since the plumber was in and out of the apartment most of the day and making a LOT of noise with various power-tools, the cats were upset and hiding.  I didn’t see Bobby all day.  I honestly thought that he had gotten out of the house or maybe down in the cellar when the backdoor was left open.  I had asked that the door remain closed but you know how it is when you have a workman doing a job … he’s not thinking about your cats.   But Bobby was in the apartment.  I don’t know where he was … but he reappeared when the plumber left & it was quiet again.

Today, we enjoyed the peace.  I did a little more unpacking but mostly read & wrote.  Jack slept on his pile of blankets.  Radar reclaimed “his” table.  Bobby wandered around & checked things out.  Soon it’ll be time to go to bed.   Tomorrow we’ll get more things put in their proper places & make this place even more homey.   I think we’re going to be happy here. 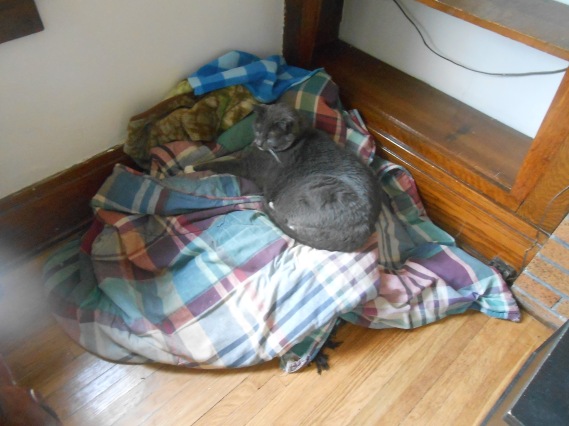 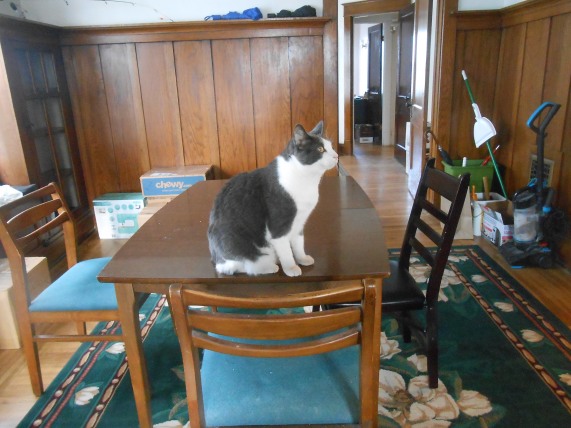 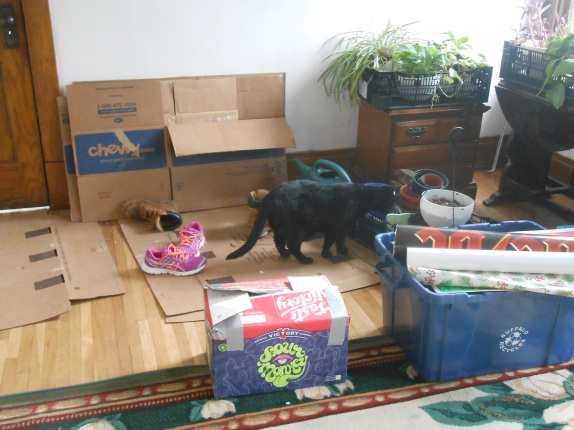 I have been moving since last Friday.  I won’t be done until this coming Monday.   I never have had a move like this & of course it’s all because of the COVID-19 virus.  The movers I hired called me on Saturday & told me that they would be unable to move me because of the ban on non-essential businesses.  My son & I moved most of my things in his Pontiac Vibe … I own around 1000 books (maybe more) in 40 milk crates & various other boxes, as well as boxes filled with my diaries, poetry, & other writing.  I have a bad back; I hired movers for a reason.  However, we got most of it done.  There’s still a few things left at the old place.  & there’s the washer & dryer that needs to be moved.  I have the same landlord at the new place as the old place; he has found me a mover who will move my washer & dryer.   So hopefully, by this coming Monday, I will be completely moved in my new place & can unpack and settle in while “sheltering in place”.

The cats have been kinda freaked out but it’s not their first move, either.  They have been checking out the new kitchen cupboards before I fill them with the china. 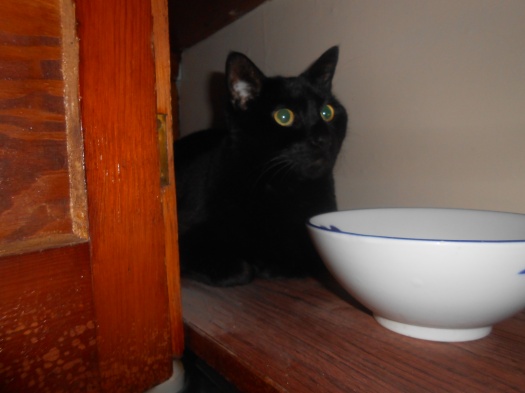 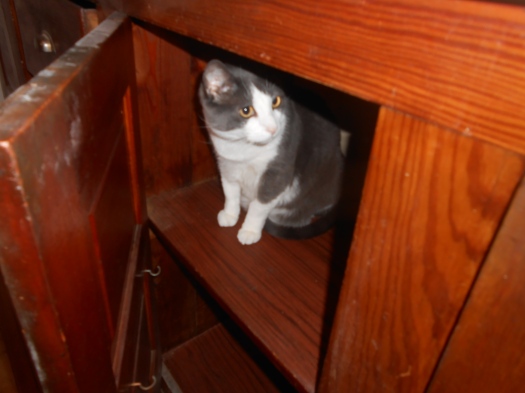 Moving is a drag but it gives Radar boxes to play in.  He likes the packing paper, too! 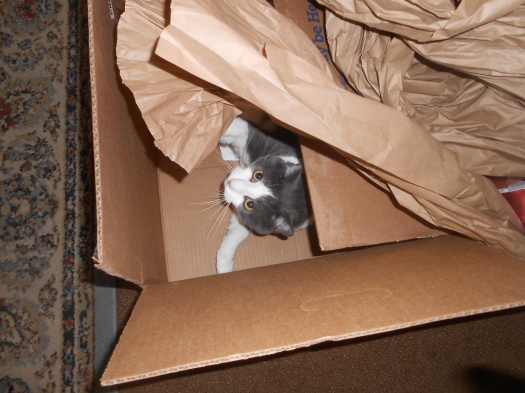 This is something that rarely happens:  Radar snuggled up with Jack.  Bobby must have been hiding somewhere.   Radar doesn’t like to sleep alone.

Sorry about the lousy picture quality; it was too bright for the flash but too dark for decent lighting.  I didn’t want to disturb the cats (& miss the shot) but turning on the overhead light so I just went for it. 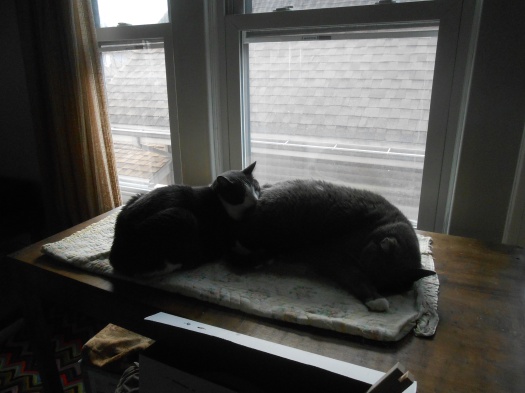